The U.S. Army traces its roots to the Continental Army formed on 14 June 1775. The Congress of the Confederation created the United States Army on 3 June 1784 to displace the disbanded Continental Army. The U.S, Army is made up of the most dedicated, most respected soldiers in the world. These soldiers protect America's Freedoms while serving at home and abroad, and they are always prepared to defend the nation in times of need.

The U.S. Navy traces its roots to the Continental Navy established during the American Revolution. The Naval Act, passed on 27 March 1794, established a permanent standing Navy. America's Navy is a force as relevant today as it's been historically significant for the last 238 years. The times may change, the threats may become more obscure, the complex nature of 21st century life may make the demand for such presence less obvious, however, now more than ever, the Navy is something to be aware of, something to be thankful for and something to be proud of.

The U.S. Marines traces its roots to the Continental Marines of the American Revolutionary War. The Second Continental Congress established the Marines on 10 November 1775. We are soldiers of the sea, providing forces and detachments to naval ships and shore operations. We are global leaders, developing expeditionary doctrine and innovations that set the example, and leading other countries' forces and agencies in the multinational military operations. These unique capabilities make us "First to Fight", and our nations first line of defense.

The U.S. Air Force was initially formed as part of the United States Army on 1 August 1907. It was established as a separate branch of the U.S. Armed Forces on 18 September 1947. The Air Force has a vision of Global Vigilance, Reach and Power. That vision orbits around three core competencies: developing airmen, technology to war fighting and integrating operations. These core competencies make our six distinctive capabilities possible.

The U.S. National Guard is part of the reserve components of the U.S. Armed Forces. The National Guard has its origins in the early militias that predate our standing military units. The early United States distrusted standing armies and kept the numbers of professional soldiers small. Primarily under State control the National Guard is composed of civilian and regular armed forces personnel. The Guard's versatility enables it respond to domestic emergencies, overseas combat missions, counter-drug efforts, reconstruction missions and more.

Designed to help grow you membership, this FREE Website that is Synced with National, for your Post / District* / Department, is chock full of tools that are easy to use.

No One Does More For Veterans

As yesterday's defenders of freedom, we want to welcome today's military service members into our ranks to become part of our elite group.  Our common bond is the battlefield. Whether it is service in the World War II, Korea, Vietnam, Kosovo, the Persian Gulf, Afghanistan, the war on terrorism or peace keeping expeditionary campaigns, your courage and sacrifice have made a difference in preserving and defending world peace.
If you have earned one of the following ribbons you are eligible to join the Veterans of Foreign Wars. 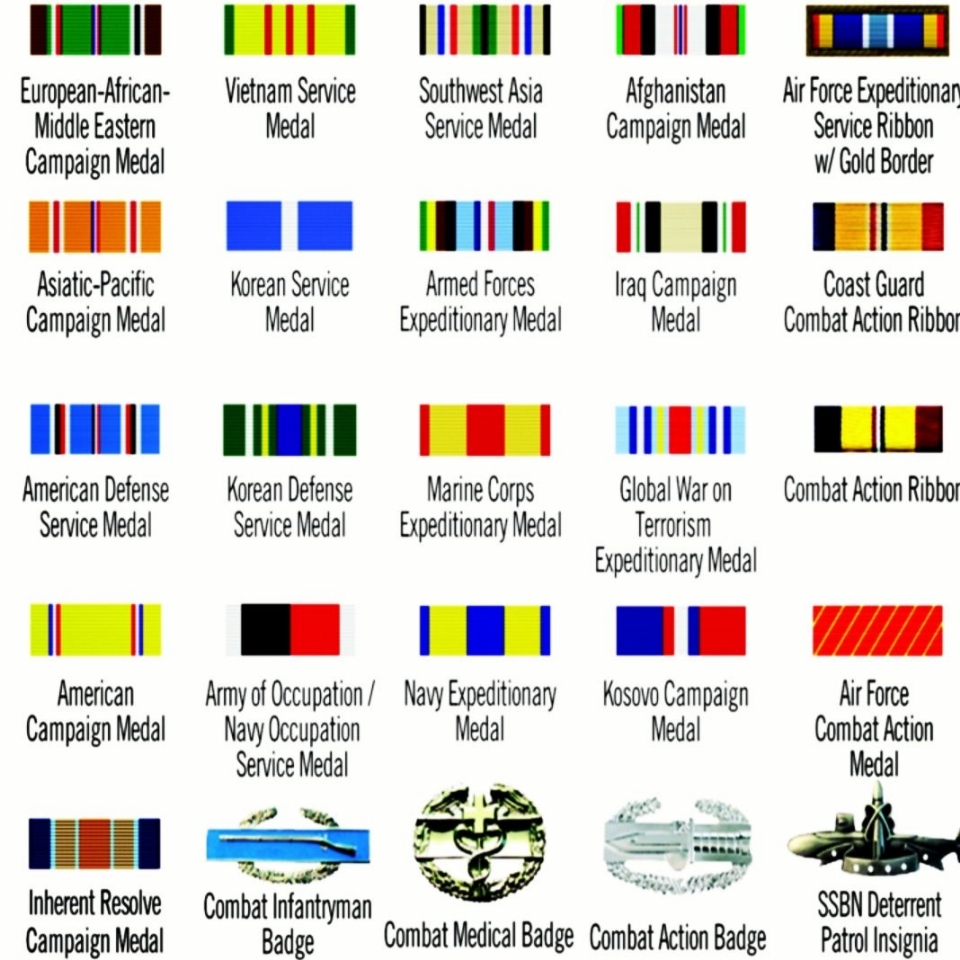 VFW Members have a National Organization that promotes Veterans' Welfare, stands up Veterans for and promotes Veterans Rights in Congress.  Without active promotion of our welfare other organizations will attempt to divert monies and benefits away from of Nation's Veterans.  Join now and enjoy the comradeship of fellow Veterans, share stories and learn about existing and new benefits at our monthly Post meetings.  See see where the nearest post to you is, go to Resources - VA 15 CA Posts to find the nearest Post to you.
Become a member of a group that fights everyday for your benefits, rights and privileges.  Current events are listed under announcement below.

Veterans of VFW Post 155, Chico, CA with the Sea Cadets Unit it sponsors celebrate Veterans Day by emplacing 200 American flags along the Esplanade, Chico by the Chico Cemetery